Castellammare del Golfo is an attractive seaside town on the north-western coast of Sicily, between Palermo and Trapani. 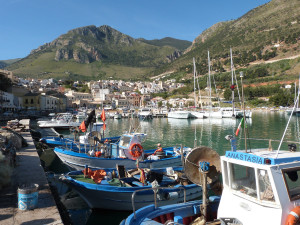 The historic little fishing port has a very picturesque location, below steep mountain slopes, with a handsome curved harbour at the foot of a small headland topped with a castle. Castellammare is just touristy enough that visitors don’t feel out of place, but it isn’t overcrowded with hotels and it has an authentic Sicilian ‘feel’.

Castellammare del Golfo’s principal attraction is the sea. The town’s little fishing and pleasure port, called the Cala Marina, curls to the west of the castle promontory, and makes a pleasant stroll, punctuated with bars and restaurants. The harbour-front route can get sadly busy with traffic – Sicilians enjoying a car-and-scooter-borne passeggiata – but when temporarily pedestrianised in the evening the street is taken over by promenading visitors and locals passing the time of day and inspecting the fish displayed in cabinets outside restaurants. There are still small working fishing boats in Castellammare, and you may see fishermen mending their nets on board, or selling the day’s catch at rickety tables on the quayside, while hopeful harbour cats prowl along searching for scraps.

An ancient route leads up to the castle from the harbourside: a flight of steps climbing through a stone doorway. This brings you to the oldest part of the town, a defensible citadel at the tip of the promontory. From here you can visit the castle, head inland up the long straight road towards Castellammare’s grid of more modern streets, or cross the narrow headland to a panoramic promenade high above the sea. Two restaurant-pizzerias up here have great views over the castle and along the coast.

Castellammare’s stumpy castle (Castello) is built on an obviously ancient site and claims Arab and Norman heritage, though the headland must been a fortified site for much longer. 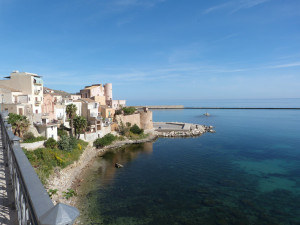 It’s likely that the bay was the harbour for the Elymian people of Segesta, famed for its surviving Greek temple. Today the castle is equipped as an interesting little town museum (free entrance), though there’s a disappointing lack of ‘castle’ atmosphere. Only some of the museum’s displays were translated into English when I visited, but it is still worth popping in for a visit. There’s a room with displays about the tuna fishing industry, historically so important to this part of Sicily, though nearly extinct in the Castellammare area. Information boards are in Italian, but historic exhibits (such as the rough boat-hooks used to bludgeon the unlucky tuna and pull them aboard boats) and a short 1950s documentary film, shot at Scopello, are accessible to all. During the film, watch out for the Rais, the leader of the tuna fishery, the traditional working songs of the fishermen and get an idea of how complex and entire a world the tuna fishery (tonnara) was. Men lived in communal buildings during the fishing season, labouring on nets which were then built into a sequence of net ‘chambers’ in the sea, into which the migrating fish would be shepherded, culminating in the ‘Room of Death’ where the nets were raised and the fish met a brutal end. Apparently at the Castellammare tonnara, one of the first fish caught was dedicated to the Madonna del Soccorso, placed on a floral float and paraded to church (later it was sold in the market and the proceeds donated to the church).